Actor/comedian Nick Offerman has announced he'll be heading back on tour in 2019 visiting 37 cities across America. His All Rise Tour kicks off July 20th in Thackerville and continues through the rest of the year hitting major markets like Chicago, San Francisco, Washington DC, Philadelphia, New York, Detroit and Atlanta. Back in 2017, Offerman launched his Full Bush Tour which consisted of 28 shows across the U.S. and Canada.

Offerman is best known for his role as Ron Swanson in the NBC sitcom Parks and Recreation. Back in 2015, Offerman joined forces with his wife Megan Mullally for a huge co-headlining tour which stretched into 2016 and visited North America and Australia. Since 2013, the American humorist has also published 4 New York Times Best-selling books including his most recent The Greatest Love Story Ever Told (with Mullally) in 2018.

Nick Offerman: Paddle Your Own Canoe 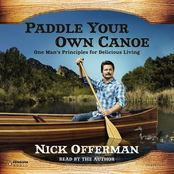 Nick Offerman: Paddle Your Own Canoe: One Man's Fundamentals for Delicious Living

Nick Offerman: Paddle Your Own Canoe One Man's Fundamentals for Delicious Living (Unabridged)