Currently there haven't been any notable Danny Bhoy concerts or tours planned for the U.S. or Canada. Sign up for our Concert Tracker to get alerts when Danny Bhoy events have been released to the itinerary. For announcements pertaining to Danny Bhoy shows, follow us on Twitter @ConcertFix. In the meantime, check out other Comedy performances coming up by Les Grandes Crues, Dan St. Germain, and Maz Jobrani.

Danny Bhoy: Live At the Athenaeum 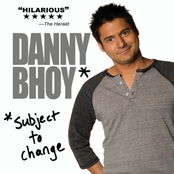