Currently there haven't been any big Eve Decker concerts or tours revealed for the U.S. or Canada. Sign up for our Concert Tracker to get informed when Eve Decker shows have been added to the lineup. For new announcements of Eve Decker concerts, visit our Facebook page. In the meantime, have a look at other Festival / Tour performances coming up by Blues Traveler, Camp Greensky Music Festival, and Moondance Jammin' Country Fest. 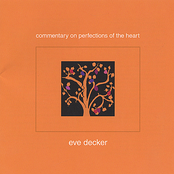 Eve Decker: Commentary on Perfections of the Heart