As of right now there haven't been any upcoming Itamar Zorman concerts or tours released for the U.S. or Canada. Sign up for our Concert Tracker to get alerts when Itamar Zorman shows have been announced to the schedule. Check out our Tour announcements page for recent announcements regarding Itamar Zorman. In the meantime, have a look at other Classical performances coming up by Beethoven 250th Anniversary, Pedro Giraudo Tango Quartet, and Steve Sweeney. 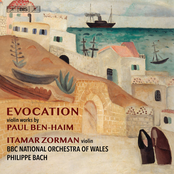